She is without a doubt a folk treasure.

‘I’m a folksinger – this is what Folk Music sounds like.’ Gerry announced to the audience at the Liverpool Irish festival a couple of years ago; this was after they had been singing along to the choruses of her self-penned songs. They seemed mildly surprised but continued to join in happily nevertheless. And indeed her music is rooted firmly in the folk tradition, often telling the stories of everyday lives in the melting pot the was Liverpool in its maritime heyday. With titles like Cunard Yanks and I Was Born in The Holy Land, you could almost be forgiven for thinking that her music is only about Liverpool or the past, but her wry observations of everyday life in songs like Lampedusa, The Middle Aisle of Aldi and The Wonder Hornpipe, bring her repertoire bang up to date; much to the delight of her charmed audiences.

THE ROAD MAY RISE
FOLKSCENE LIVE ALBUM OF THE YEAR

In January 2020 when Gerry recorded a live concert in St John the Evangelist Church Great Sutton, none of us had any idea of what would happen during the weeks and the year that followed. In retrospect it was a momentous occasion and the last live concert that many of those present would attend that year. In acknowledgement of this, the names of those audience members who signed an attendance list on the night is included on the CD sleeve, for posterity.

Dave Burrows engineered the concert, mixed the recording and produced the entire CD which went through eight incarnations, and after Gerry wrote and recorded three songs in her kitchen during lockdown, Dave mixed them too and added them to the tracklist. But it was the last song of that evening: “The Road May Rise” which took on a deeper significance during the darkest days of lockdown, and in the end it had to be the title track.

The concert features local musician Harry Lowry on guitar and concertina who is now performing with Gerry at her live gigs. Arthur Garnett, Harry’s musical partner in Yesterday’s Men, came along to add his Bandoneon to the musical mix. Local singer songwriter Paul Reaney played bass on most of the tracks. The CD was launched at Bromborough Folk Club on 25th August, and is now available through all the usual channels. 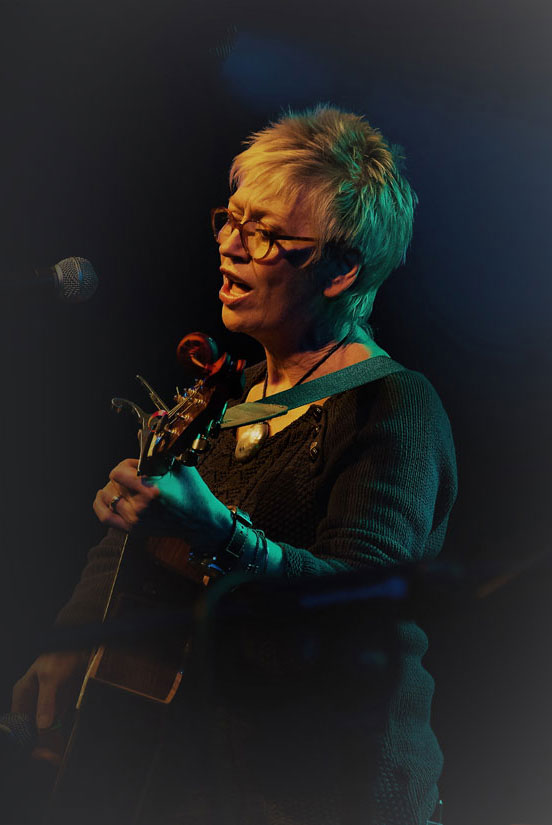 “As an artist Gerry Ffrench is able to successfully bridge the gap between the deeply authentic and the contemporary. Her songwriting truly reflects not only her locality, but also a universality. She is without doubt a folk treasure.” 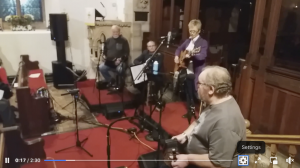 “Gerry Ffrench is a remarkable singer songwriter …with her musical feet firmly in the tradition , she writes and performs superb songs that have a sense of story and reality. She is also an accomplished guitar and banjo player. It’s a compelling combination.”

Released in Autumn 2015, and Gerry’s first foray into recording, it contains four of Gerry’s poignant songs of War. The eponymous My Brother’s Shoes was inspired by a pair of combat boots left at the Vietnam War Memorial in Washington DC by a veteran of the war. The boots appear on the cover of the CD.

Released in 2016, it contains eight of Gerry’s own songs about life in the city and Gerry’s arrangement of the traditional Irish song My Laggan Love which was popular in her live performances. Put together like a live set, it mixes hard hitting songs such as Docker’s Pen and its historical context, with light hearted songs such as Cunard Yanks or The Claims Solicitor which has a totally contemporary message.

Take a look at the review of Rivercityology in Buzz Magazine

This a really good album from Gerry Ffrench who, at this moment in time, is a little known artiste outside of Merseyside. However, I have a feeling this may all soon change as her fame spreads.

Once again, I am reminded how many really good talented performers we have on Dee & Merseyside. How lucky I am to live here.  In a fairer world we should be seeing Gerry on the BBC2 folk awards, – but may never happen.

Gerry is a real folk singer – songwriter from Liverpool, and just as Jess Lowe takes his inspirations for his songs from the northeast, Gerry takes hers from Merseyside. On this album Gerry sings her own songs with honesty and feeling. The songs are well crafted with lyrics that are clear. Even if you don’t live in this area, you are sure to find them interesting.

Gerry wrote all the songs on the album, apart from one, which is a traditional Irish ballad. She accompanies her self on guitar and banjo nicely, keeping the accompaniment to a minimum and its tastefully done. One other thing I liked about this album. This is how Gerry sounds ‘live’ – so should you go to one of her performances you won’t be disappointed.

I enjoyed this album. There is no ‘album fodder’ on it. A pity there is only 9 tracks. However, Gerry also has an EP with 4 tracks on it called * My Brothers Shoes *. I recommend if you seek out this album you get the EP as well.

Gerry will be appearing at the Wirral Folk Festival at Ellesmere Port in June, and later on in the year on 12th Sept at The Mucky Duck Folk Club in Ewloe.

Catch Gerry’s act if you can. She is an artiste that is on the way up!

Released at Christmas 2016 this contains three of Gerry’s popular Christmas songs. Love in A Box was initially written for the Wirral Christmas Shoebox Appeal Charity. Days of Grace celebrates love in later life while Christmas in The Holy Land harks back to a recent past recalling Christmas savings clubs, and Tonnies (tontines) but mentions several other parts of the city besides the legendary “Holy Land” in the Dingle!

Recorded over the course of a year as the songs were written, this album contains eleven of Gerry’s self penned tunes, and one re arrangement of The Lowlands of Holland, a traditional Irish song.

Sleeve Notes from Over Sea Under Stars

I was Born in The Holy Land.  Moses, David, Isaac and Jacob Streets are known affectionately in the Southend of Liverpool as “The Holy Land” and in a city where family ties are sacred the Holy Land maintains a reputation for being particularly clannish. Despite the surrounding streets having been flattened for redevelopment, the Holy Land remains, a reminder of a way of life which has all but disappeared.

The Other Maggie May   Challenged by John Coleman to re write the traditional Scouse anthem, this song tells the story from Maggie’s point of view. Based on the traditional tune it tells the story of what happened to the young girl who was deserted and left to the mercy of a hard world, describing the events which turned a good girl to the bad.

The Caged Linnet. Between 1645 and 1650, the English under Cromwell transported about 50,000 Irish people, mostly women and children whose only crime was to be related to a rebel. They were used as indentured workers (and sometimes “comfort women” ) in the tobacco plantations of Barbados and Virginia. (See Hell or Barbados by Sean Callaghan)

The Liverpool Girl is the story of an old salt whose home is the sea. He looks back on a life e spent wandering freely, and only “allows his heart to break” late at night, when he yearns for the Liverpool girl who once loved him in his youth; maybe she wasn’t unlike Maggie May?

The Lowlands of Holland (trad) This version of a popular folk song from the Napoleonic Wars shares a tune with The Boys of Wexford. The latter was a rallying tune a hundred years ago, for the Liverpool Irish during the bad old days of sectarianism in the city. The tune was also known as The Flight of the Earls.

The Scaler Lad. When steam replaced sail, one of the maintenance jobs that had to be done was the de scaling of the steam boilers in the ships’ engine rooms. Little boys were the only ones small enough to climb inside the boilers and it was a dangerous, unpleasant job. This song tells the tale of hapless Johnny who graduated from being a scaler lad to becoming a trimmer; an equally dehumanising occupation, trimming coal to the stokers in the boiler room. The tune is based on the traditional folk song : The Sailor’s Life .

It Was Never Like Downton Abbey Harry Smith, a wonderful gentleman and nonagenarian was the inspiration for this song . When he spoke at the Labour Party Conference a few years ago, he used this phrase. Point of fact : £25 per annum (yes per year!) was the usual wage for a housemaid a hundred years ago.

The Gunner’s Prayer Is a song dedicated to the brave men of the Arctic Convoys of WWII.

Lampedusa Tells the true story of a fisherman in Lampedusa who went to the rescue of a boat load of refugees which sank in the Mediterranean. The women and children were below decks and the men above when the boat sank suddenly. It is a tragedy which continues to be played out again and again out there on the high seas.

When The Wind Blows Up From The Mersey Describes a way of life long gone ; from the point of view of the wife left behind who never knew whether her sailor Johnny was going to come home to her or be tempted by an easier life with another woman in America (or anywhere abroad)   In houses with no bathroom, men often shaved at the sink in the kitchen… as the song describes…. And here’s brief Glossary

My Cheating Heart Liverpool took Country and Western music to its heart; popularised   by the Cunard Yanks in the fifties who brought home the music from America. The tales of hard lives and broken hearts sung by Williams, Cash and Cline resonated with the people of the city. This song, inspired of course by the fabulous old Hank Williams classic, tells the story of a lady whose constant companion in her chaotic love life is her cheating heart.

Over Sea Under Stars An instrumental tune inspired by my Father’s birthplace, Shell Cottage on the cliffs in Cullenstown, Bannow County Wexford. 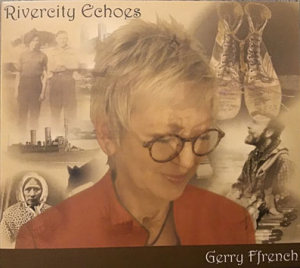 “The past eighteen months have been the busiest in Gerry’s music career so far and her gigs have increased in number whilst her songwriting has reached a new high. Her city and the river provide inspiration, with both wars also represented though only to explain how some things happened, rather than any glorification of conflict. This CD is a good ,balanced release which shows Gerry at her best, with understanding and empathy of each subject she tackles. 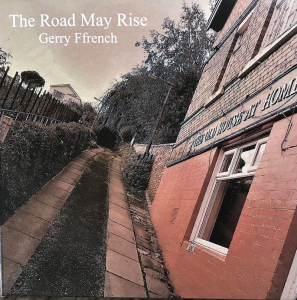 Recorded live with an audience of over 100 people in January 2020. There are sixteen tracks in all ten of which are previously unrecorded, and it includes three songs written and recorded during lockdown.

Take a look at my Facebook page for more photos